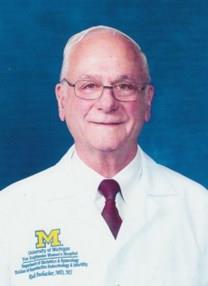 With a very heavy heart I share the sad news that Dr. Rudi Ansbacher died on January 3, 2018. Dr. Ansbacher was a founding member of ASA in 1975 and had a long legacy of service to the Society. He was a member and/or chair of our Membership, Liaison, Nominating, Education, Finance, Ethics and Future Meetings Committees and an editor of our Journal. He was elected to the offices of Secretary, Vice President, President (1984-5) and Past President. In more recent years, he applied his considerable strategic vision and fundraising talents through his work on the Long Term Planning Committee and Funding Needs Task Force. When the Endowment and Development Committee was formed, Rudi volunteered to serve and was instrumental in our successful annual fund campaigns. Rudi’s enthusiasm for ASA was contagious and few could say no when Rudi presented them with the opportunity to support the society he loved and believed in.

As one of the few ObGyn’s in ASA, Dr. Ansbacher brought an important perspective on fertility management. He embraced the concept of partnership between Reproductive Endocrinology and Urology in evaluating and treating the infertile couple. He published numerous papers and was recognized as an extraordinary teacher at University of Michigan where he was Emeritus Professor of ObGyn. His illustrious academic career included over 100 peer reviewed papers, many book chapters and presentations. He was also an international expert on menopause and made significant leadership contributions to many professional societies and medical journals.

I was lucky to experience first-hand Rudi’s dedication to helping women become effective leaders and benefited deeply from his mentorship. He established the University of Michigan Rudi Ansbacher Women in Academic Medicine Leadership Scholars Program, an intensive 18-month leadership program designed to accelerate the development of women for senior positions in academic medicine and healthcare. He understood that good mentors are critical for the success of this goal and established the Rudi Ansbacher Leadership Award for Support of Women in Healthcare to recognize guidance of women for leadership roles.

Those of us privileged to know Dr. Ansbacher as Rudi had a true friend. His native intelligence, zest for life, optimism, concern for those who needed help, and commitment to service were accompanied by a wonderful sense of humor. A conversation with him was always stimulating and delightful. He had a knack of making you feel that you were the only important person in the world when you were speaking with him. Rudi was one of those rare people who appreciated and embraced all that life sent his way. Gratitude and joy shone through him to envelop anyone fortunate enough to be in his presence.

Sadly, Rudi did not live to accept his 2018 ASA Distinguished Service Award this April. As one nominator wrote, “His efforts serve as a beacon for others to follow and as a role model for the next generation of ASA leaders.” We have lost a friend, colleague and ASA giant, but Rudi Ansbacher’s beacon will serve as a shining guide for our future actions and aspirations.

Rudi’s service of memory will be held Saturday January 27, 2018 at 1:00 p.m. at the First Presbyterian Church of Ann Arbor, 1432 Washtenaw Ave, Ann Arbor, Michigan 48104. A reception will follow at the Ann Arbor City Club. Members wishing to commemorate Rudi’s memory with a memorial tribute gift are encouraged to mark their donations for the Women in Andrology Fund. Tissy, his wife of 52 years, and son Todd will be notified of all contributions in his memory.